Renewable Energy Communities:
All the News on the Transposition of the RED II Directive

RED II DIRECTIVE: THE NEWS ON THE ENERGY COMMUNITIES ADDRESSED IN THE IMPLEMENTATION

On 15 December 2021, the Legislative Decree which definitively transposes the two directives RED II (2018/2001) and IEM (2019/944), came into force. With this step, Italy is finally preparing to conclude the process of aligning the legislation on renewable energy sources and energy communities.

There are several innovations contained in the decree which simplify and accelerate the energy transition path aimed at achieving the objectives set at European level for 2030 – a minimum of 32% green energy – including through the large-scale diffusion of energy communities.

Note that Italy is late in this process, so much so that on 26 July, 10 infringement procedures were opened by the European Commission for failure to transpose some directives, including precisely the one concerning energy communities.

But let’s proceed with order.

The starting scenario on Energy Communities

The process of transposition of the RED II Directive began with the Decreto Milleproroghe (so-called “Thousand-extension” Decree-Law) which came into force at the end of February 2020 and introduced in the Italian legislation the definitions of:

Specifically, RECs are legal entities made up of groups of subjects (such as natural persons, local authorities, companies) located in the vicinity of renewable energy production plants that group on a voluntary basis to produce and consume clean electricity, according to the principles of self-consumption and energy self-sufficiency.

These two configurations are very important tools to encourage the active involvement of citizens in the country’s energy transition process, and to counteract the phenomenon of rising energy prices for families and businesses.

However, the Thousand-extension Decree-Law also introduced some limitations that are important for the development of RECs, such as: the concept of physical proximity for the aggregations, limiting the creation of energy communities to users with the same secondary substation, and the total power limit for systems that cannot exceed 200 kW.

The next step was the ARERA Resolution no. 318/2020 of August 2020, which contains the Authority’s provisions on the regulation of economic entries relating to electricity that is the object of collective self-consumption or of sharing as part of a renewable energy community.

Subsequently, the Implementation Decree of the MiSE of September 15, 2020 whose article 3 sets the incentive tariff, recognised for 20 years, for the remuneration of the energy produced by renewable energy plants included in the aforementioned configurations:

To date, this measure has not undergone any changes and it is possible to carry out simulations on the generation of incentives with the ROSE Energy Community Designer.

Other important measures, in the context of the ecological transition, are those contained in the National Recovery and Resilience Plan (NRRP), approved on 13 July 2021, which allocates approximately 60 billion in investments to the “Green Revolution and Ecological Transition”. Of these, 23.78 billion are devoted overall to renewable energies and specifically 2.2 billion for the development of energy communities. The objectives to be achieved are to increase the quota of energy produced from renewable energy sources (RES), to strengthen and digitise the network infrastructures in order to accommodate the increase in production from RES.

About a month later, on 5th August, the Council of Ministers preliminarily approved the implementing decree of various European directives, including the RED II and IEM, and published the draft.

As previously mentioned, on 15th December the legislative decree which definitively transposes RED II and IEM came into force (here is the integral text).

This step enables completing the legislation and thus allows the development of large-scale energy communities. In particular, there are 2 main elements that allow this step:

But let’s scroll through the legislation and see the most important measures.

Size and power of production plants

The legislation distinguishes the production plants from renewable energy sources into two types based on their power:

As regards the shared energy incentive mechanisms, Article 5 confirms the provisions of the draft, and provides that the electricity produced by plants powered by renewable energy sources can access tariff incentive instruments, and that the incentive is assigned through a tariff established by Gestore dei Servizi Energetici (GSE S.p.A.) on the portion of energy that is self-consumed, from the date of entry into operation of the plant.

As regards the large plants (those with power at least equal to or greater than 1 MW), the incentive is attributed through competitive procedures of downwards bids carried out in reference to power quotas.

For small-sized plants (power below 1 MW), the incentive is awarded according to the following mechanisms:

The combination of renewable energy sources with energy storage systems is also promoted, in order to allow a greater programmability of sources.

The conditions for cumulation with the tax concessions envisaged for the construction of the plants and storage systems as well as with other support schemes, including those of the NRRP, are established, taking into account the different subjective characteristics and those of the plants, maintaining the principle according to which an overall fair remuneration of the interventions is guaranteed.

Regulation of tariffs for small plants

Article 7 deals with the issue of the Regulation of tariffs for plants with a power below 1 MW, defining the methods for implementing the incentive systems whilst respecting certain criteria.

For plants with generation costs closest to market competitiveness:

For innovative plants and for plants with higher generation costs:

Diffusion of renewables in Italian regions by source (MW) 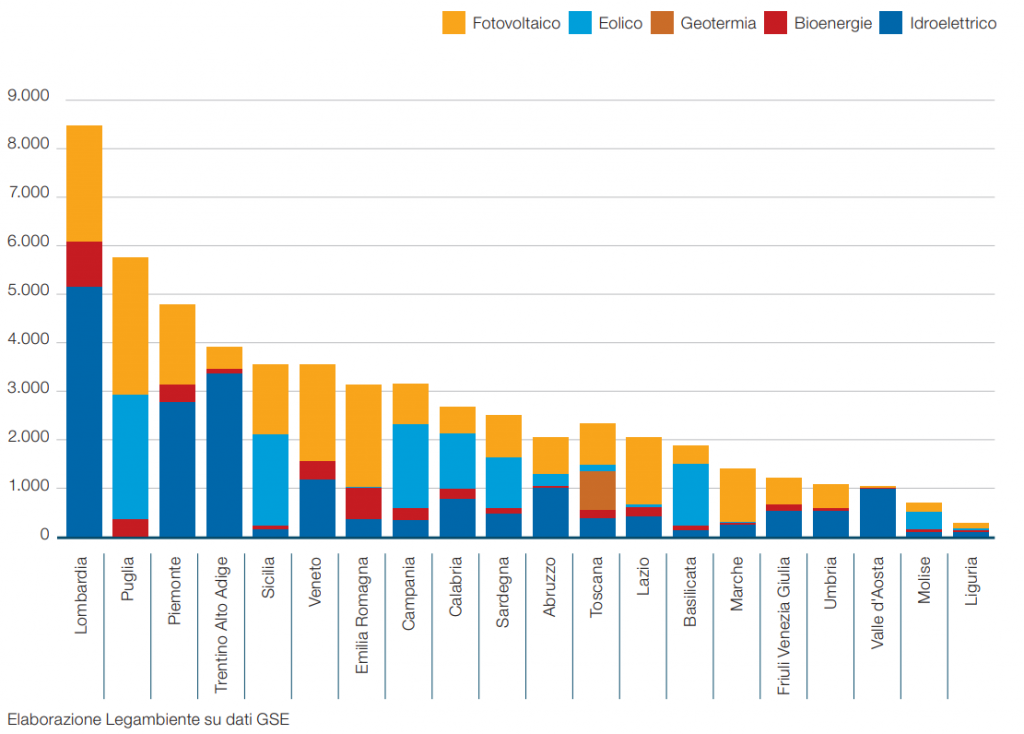 Regulation of incentives for energy sharing

As regards the Regulation of incentives for energy sharing, Article 8 updates the incentive mechanisms for plants fuelled with renewable energy sources belonging to collective self-consumption arrangements or to renewable energy communities with power not exceeding 1 MW.

What is missing to complete the legislation on incentives?

In order to start with the large-scale development of energy and self-consumer communities, the last step is missing: within one hundred and eighty days from the date of entry into force of the decree, by means of one or more decrees of the Minister for the ecological transition, ARERA will have to define the procedures for implementing the incentive systems.

Article 15 clarifies and outlines the aspects inherent to the use of the proceeds of CO2 auctions to support the costs of incentives for renewable energy sources and energy efficiency. It establishes, in fact, that starting from the year 2022 a share of the annual proceeds deriving from auctioning CO2 quotas should be destined to cover the incentive costs of renewable energy sources and energy efficiency through measures that are covered by the energy tariffs.

Digital platform for the authorisation of renewable energy plants

Within 180 days from the date of entry into force of the transposition decree, through a decree of the Minister of Ecological Transition, a unique digital platform will be created and managed by GSE for submitting the applications for the authorisation of plants, and which will provide guidance and assistance along all stages of the administrative procedure (Art 19).

Within 180 days from the entry into force of the decree, through one or more decrees of the Minister of Ecological Transition, homogeneous principles and criteria will be established for the identification of both suitable and non-suitable surfaces and areas for the installation of renewable energy source plants having an overall power at least equal to that identified as necessary by the INECP to achieve the development objectives of renewable energy sources, minimising the environmental impact and the maximum portion of land that can be used by the plants (Art. 20). A digital platform will also be created at the GSE with the aim of including all the information and the tools required by the Regions and Autonomous Provinces to connect and process data for characterising and qualifying the territory, including in relation to already built and present infrastructures as well as in relation to those authorised and in the process of being authorised, the estimate of the potential and the classification of surfaces and areas (Art. 21).

The latest measures provided for in the decree

Finally, the latest measures provided for in the decree are:

Why use software to manage energy communities?

The entry into force of the decree that definitively transposes the RED II directive completes the regulatory scenario and marks a very important step for the electrification of the Country’s consumption, thus giving the green light for the large-scale development of energy communities and therefore bringing Italy out of the experimentation phase and continuing along the path of decarbonisation.

Hence the need for sector operators to acquire software for the management of energy communities. These digital platforms allow the feasibility study and the assessment of the economic sustainability of these new configurations by making simulations in the design phase in order to allow a correct assessment of the economic and environmental impact that a new energy community project may have.

Maps Spa, which has always been attentive to the issues of digital transformation and sustainability, to further accelerate the ecological transition process and allow Esco and Utility to easily develop their energy community projects, has created ROSE Energy Community Platform: the first software equipped with Artificial Intelligence for the management of energy communities.

Through its functionalities, ROSE accompanies developers of energy communities from the preliminary stages of project evaluation up to their virtualisation. How? By allowing to estimate the performance at a community and individual member level in an intuitive manner, to monitor consumption and production without hardware constraints and to optimise the balance of resources through Artificial Intelligence, to configure and manage the distribution of incentives through its proprietary algorithm, and to involve the participants with gamification logics activated by energy data. Furthermore, its system of APIs and of multiple supported protocols guarantees a high level of flexibility, connectivity and integration with resources, software and smart meters, enabling communication with user resources and devices, RTUs and 1G and 2G meters.

One of ROSE’s modules is the Energy Community Designer, a suitable tool for simulating the generation of incentives, based on the estimate of the level of self-consumption, and for choosing the optimal configuration for your project. Available free of charge, it facilitates the preliminary stages of feasibility study, assessment and economic sustainability of the projects.

The main features of the energy community simulator are:

For more information or to try the basic version of our simulator for free, visit the dedicated page.

Paolo Gangemi is Product Manager of ROSE Intelligent Energy Management System, the innovative solution for the Energy market in the field of Smart Grids with applications for energy efficiency, flexibility, predictive maintenance and energy communities.

Do you have a pilot project? Try the energy community starter pack. 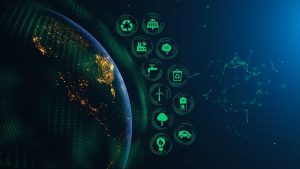 Why Use An Energy Community Simulator?

Do you have a pilot project? Try the energy community starter pack.